Sometimes God loads us with benefits simply by placing lovely things around us for our eyes to enjoy.

This morning I had opportunity while at work to walk around a farm homesteaded in 1888. My iphone documented some of the things I stopped to look at, and these pictures remind me again how blessed I am to live on the Palouse, to have a job that takes me to such a lovely place, to have leisure occasionally (while working) to stroll around and enjoy myself, and for the gift of this memory-catcher camera. 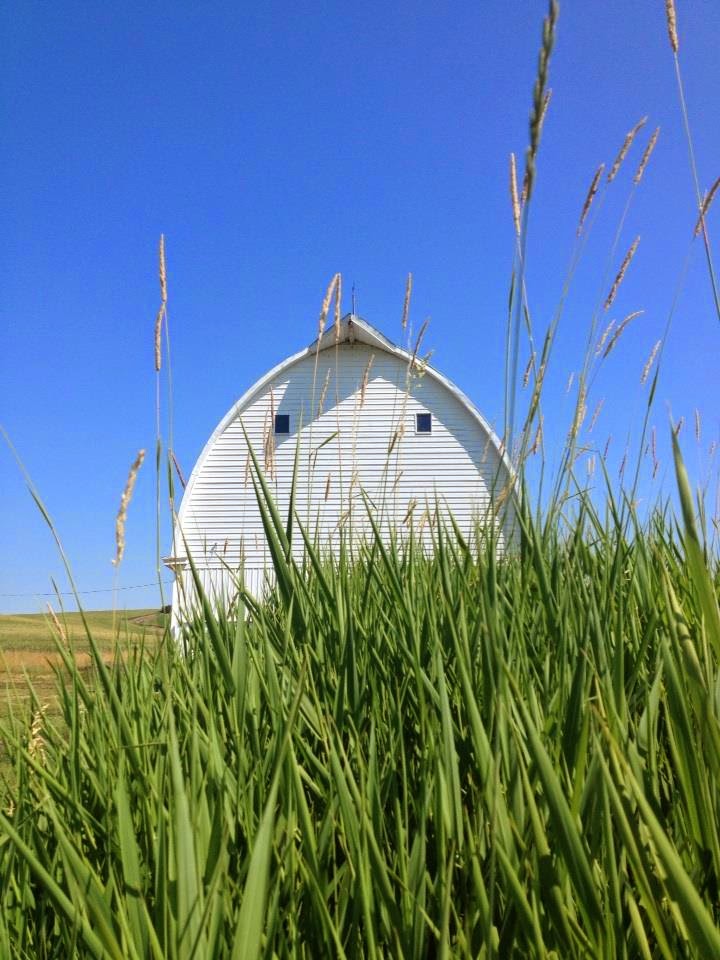 Built in 1911. Photographers are always stopping along the highway to get shots of this barn. 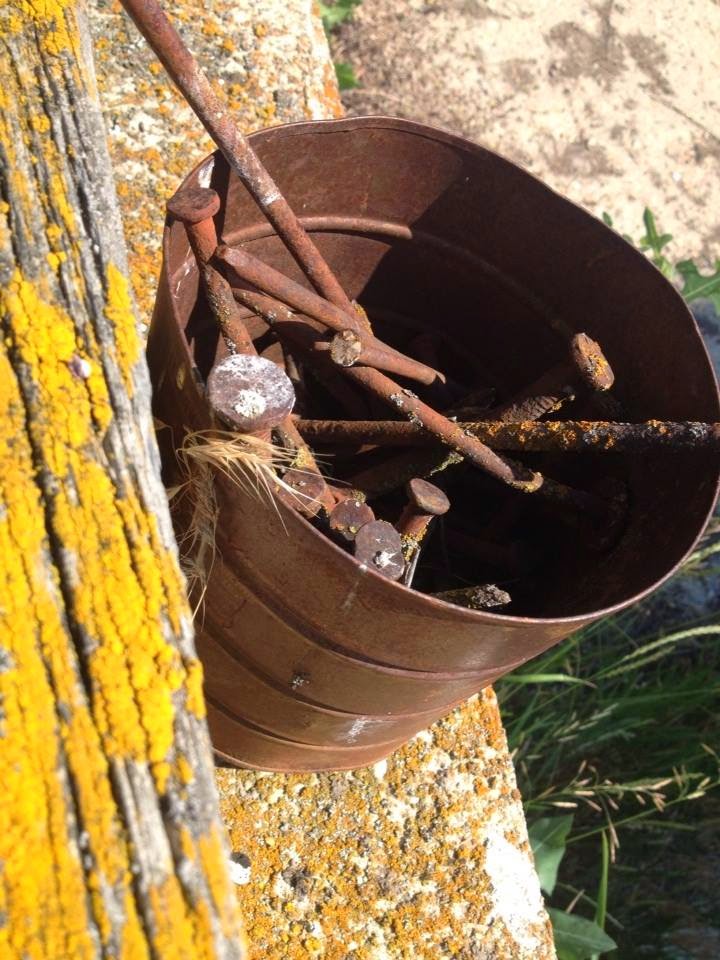 On an old loading chute: the essential coffee can. 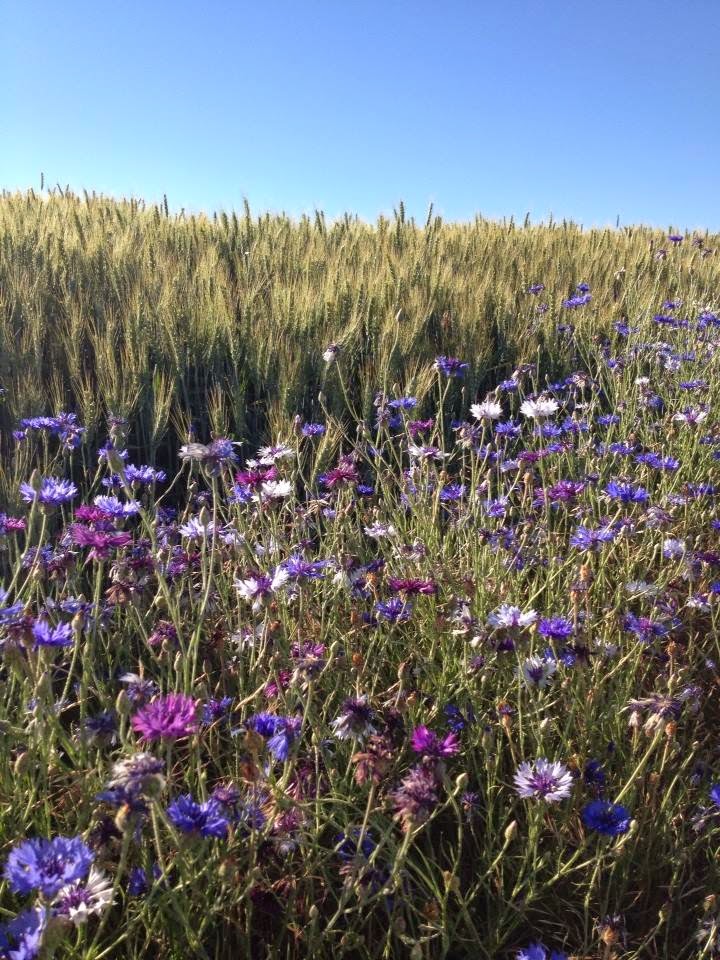 Ok to be fair, this one was taken last week. Wheat and bachelor's buttons (I think). 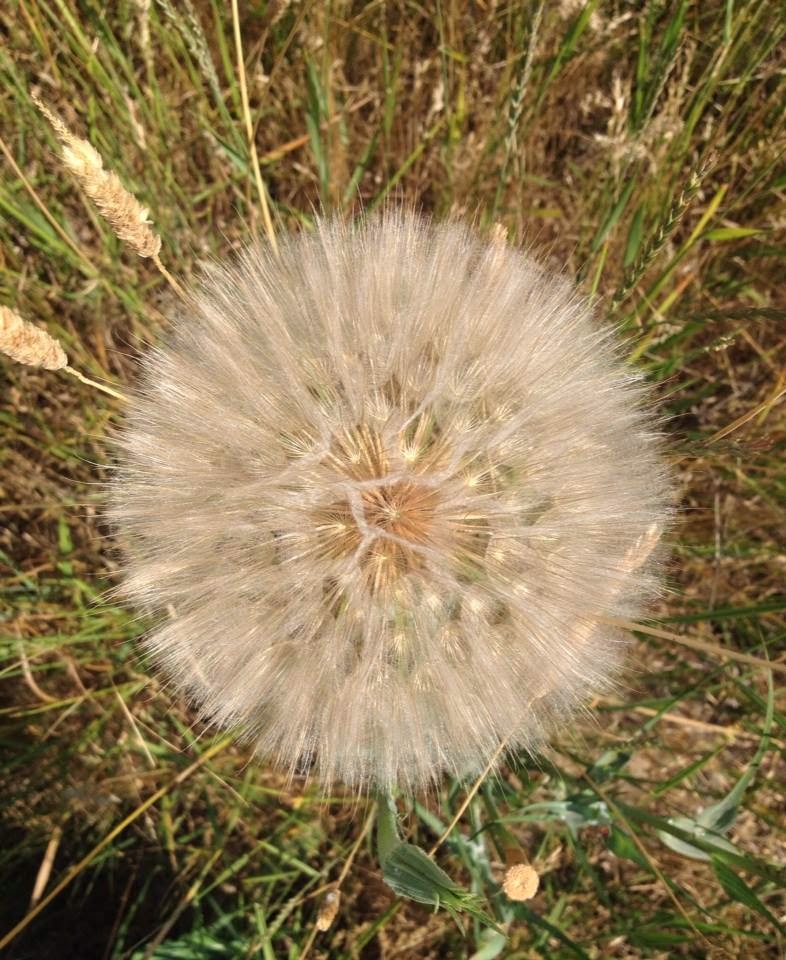 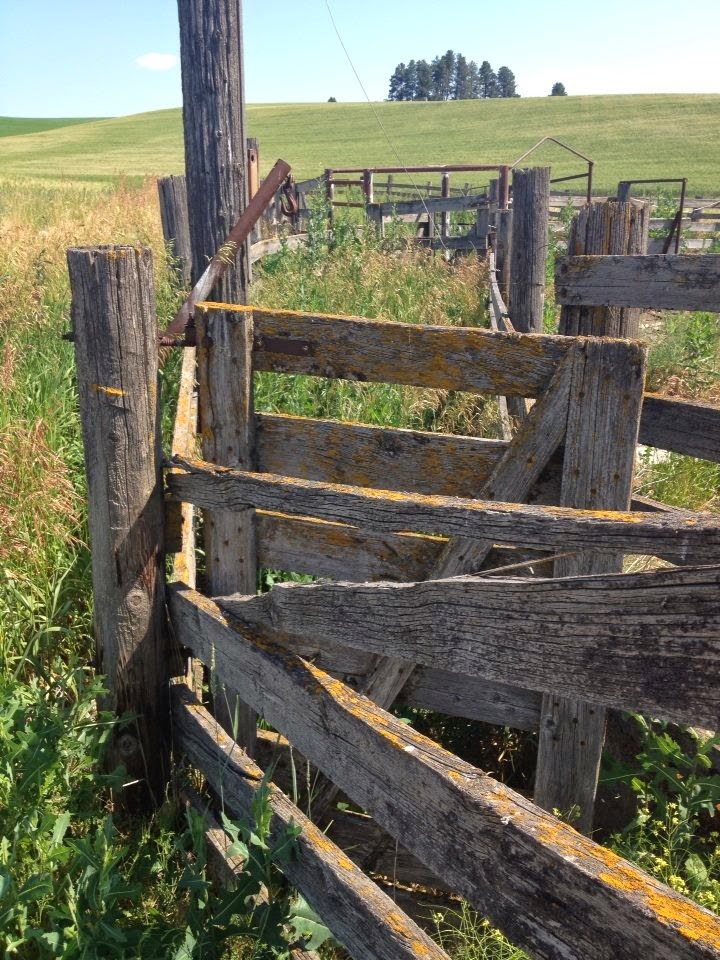 Where once was livestock. 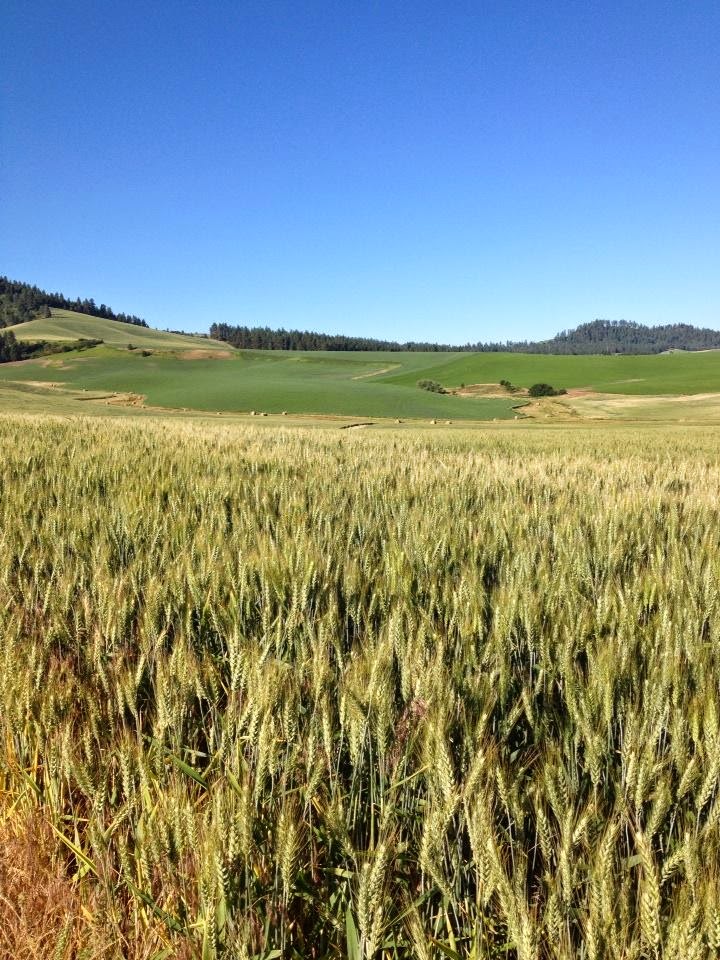 Also taken last week, but I couldn't resist posting. I don't know how people can say the Palouse is ugly. 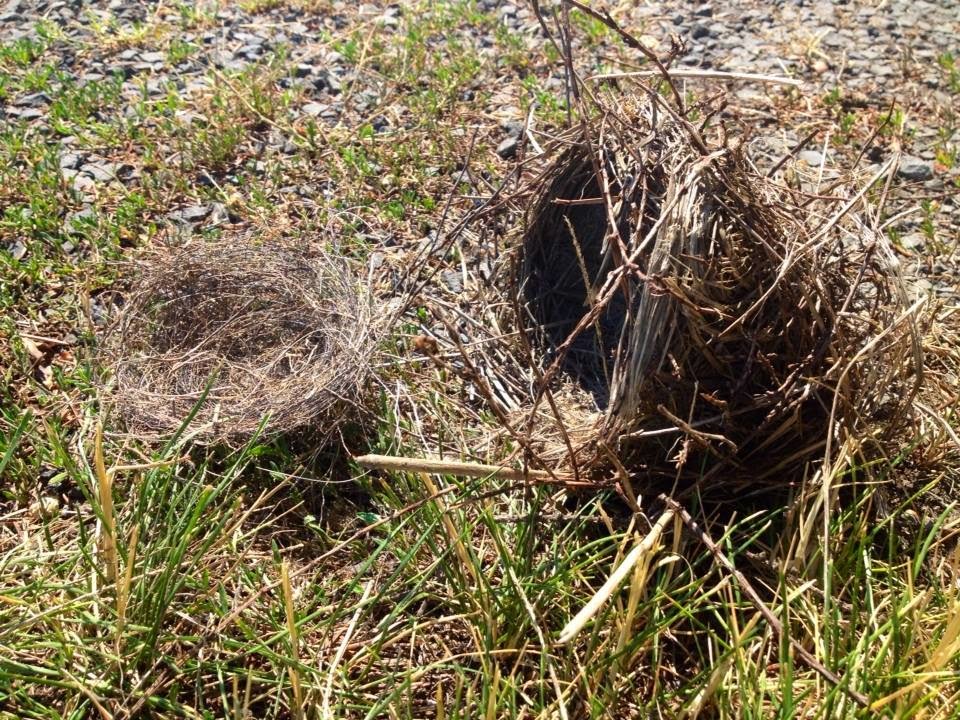 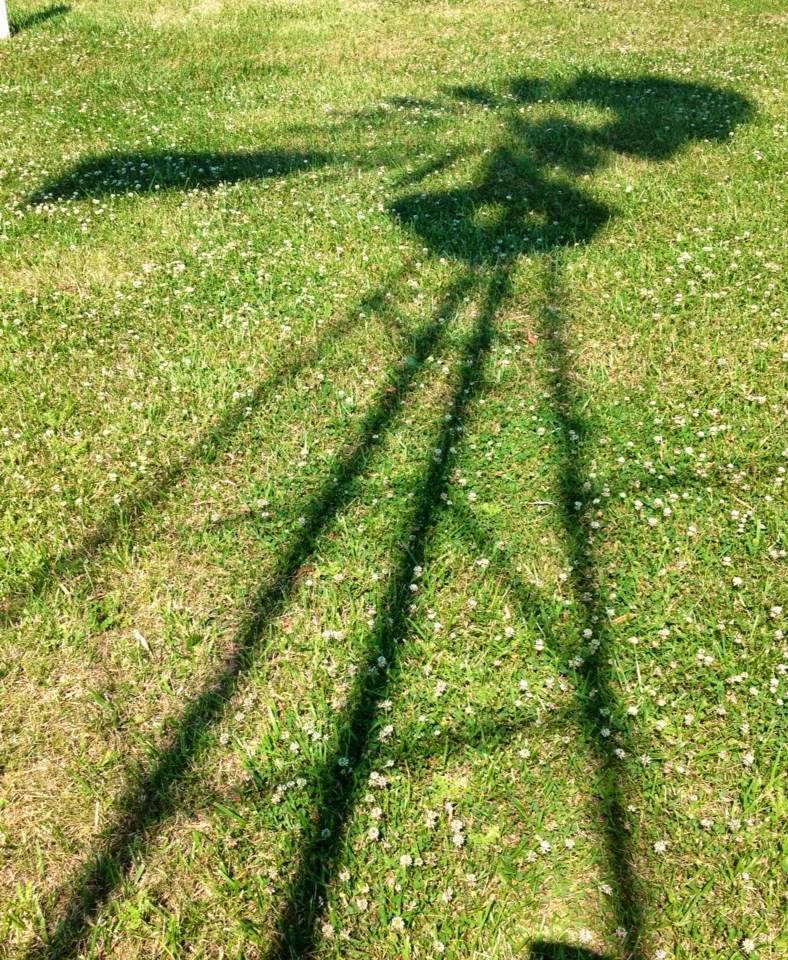 Shadow of the windmill.
Posted by Bobbi Martens at 3:39 PM No comments:

Well. I don't keep up with this blog anymore. I likely won't ever be a regular blogger, but once in a while I need a place to spill what's been marinating in my mind, or a reason to put together some words about feelings that I haven't been able to properly organize yet, or I figure a couple of my sisters who read this will like to hear I'm still alive and happy.

Today is a fairly ordinary summer Sunday. Sleeping in happened; church, coffee and snacks after the service happened; and coming home and tidying a bit and putting together a little lunch has already happened; it's warm and I'm about to switch to a cooler outfit, but am a little too lazy to do so just now; there's a ball game on sort of in the background; we're having a small group of people over later for a meal, and Fraser has done a lot of the planning for that; a nap is extremely likely to happen in a while. Ordinary Sunday stuff.

Sometimes it's on these ordinary days, when it feels so normal to be here and do what I'm lucky to be able to do, when the blessings are so thick about me that there's not much dark or difficult to contrast them against, that I feel the need to give purposeful thanks.

There are always so many more gifts than we can name, but these moments are some recent things I am specifically glad God gave me.

1. Thursday at Great Grandma Lilly's funeral, standing there listening to my grandpa (her son) who is usually so spare of words honor her with a speech longer than most of us would have wanted to give on such a hot day in such an emotional moment.

2. Going in to the work office Friday, and receiving kind and sympathetic words of a friend from my boss, as well as encouraging and grateful words about my work.

3. Spending so much time in the late afternoon and evening in our room, just relaxing, whether reading, napping, talking, or watching TV shows on a laptop. Our room is ever-so-slightly cooler than the living room, and with the ceiling fan on, and the box fan in the window bringing in air from the shady side of the house, it is just about bearable on a 95-100 degree day.

4. Walking through Farmer's Market with my husband, that half-wandering, half-purposeful amble that says This is Saturday and we don't really have anything that needs doing, but maybe we'll buy some things. The well set up booths, the pompous music in the square and the random person strumming a guitar or playing off-key violin on a corner a block away, the toddlers sticky and hot in their strollers, the kids wading in the fountain and their mothers scolding them, the fluxing stream of people going by and around you, the sunglasses, short shorts, loose trailing dresses, the scents from the spanakopita booth and Patty's Kitchen Mexican booth and the burger booth, all the greens and leaves and shapes of vegetables, and all the handmade, homemade things from wooden bowls to pocketed aprons to goat milk soaps to deck chairs.

5. Driving through the swells and dips of the hills turning from green to gold.

6. Standing in a cold shower after a long day, a hard workout, and a lot of sweating.

7. Running the other evening, and turning around to head home, and suddenly being hit with the realization that I have a place and it is my favorite place to be; that I have a husband and he is my favorite person to be with. Mostly, I thought back to when I was single and ached for what I have now, when (all through my twenties, and a good bit of my teen years too) I would see a couple, and when they shared a glance, or playfully poked one another, or she leaned her head against his shoulder, or (most poignant for me) when he put his arm around her next to him, and the degree to which I ached with wanting and hoping and praying and wishing and despairing of that ever being me... suddenly so very thankful.

8. Looking out our west-facing windows most evenings and seeing the most beautiful sunsets against the old seed mill on the corner - sunsets obscured a little by the town and trees about us, but always still fabulous.

9. Pulling a load of laundry from the dryer that is mostly white and light-colored clothes that smells so fresh and ready to be worn tomorrow.

10. Sitting in church, having just received the bread and wine from the person next to me and passed them on down the row, that moment of partaking when a lot of other people are also partaking but the hymn is being carried on by those who have already taken and swallowed or those who are waiting for theirs, and the sound is like a beautiful wave that lifts you without a bit of your effort.
Posted by Bobbi Martens at 1:41 PM 1 comment: