Lately I've been poking around on this site, Budget Bytes, by Beth. This is not because I know Beth (because I don't), and not because we need to save money (though beating the budget is always nice), but simply because I somehow got a link to it and have found so may delicious looking recipes there. Admittedly I have only made a couple of them. But I have been faithfully pinning them like a true Pinterester for future use, and wow, some are just phenomenal looking.

Last night I made Chicken and Pumpkin Soup. We had leftover chilis in adobo sauce from something fancy Fraser made earlier this week, and pumpkin from a Christmas pie, and one last pair of chicken breasts from a package, and there are always leftover parts of onions in the fridge and partial bags of frozen veggies in the freezer.

This is super easy. The recipe says it takes an hour and 5 minutes, and that's about right, while during that hour you definitely have some free time to toss together a salad or clean the kitchen floor - or both, as it happens I did, because I did ten minutes of prep work earlier in the afternoon just after finding the recipe. I get a little excited about putting together a tasty supper, especially when the husband has done most of the cooking for the last week and I'm needing to get my own creative juices flowing again before he takes over. :)

I changed a few things in the recipe, but not enough to affect the flavors that much. I used about 50% more chicken and 50% more pumpkin (which was a pumpkin and squash mix, actually, since I baked up a tiny decorative squash that's been sitting around here forever. The picture is of the beautiful steaming thing after pulling it out of the oven - sitting pretty next to the dutch oven we use the most, this perfect smallish soup-size orange one). I used that salty powdered cheap chicken boullion, but it tasted fine - didn't need to add any salt to the finished soup. Annnd I skipped the fresh cilantro, partly because my husband doesn't really care for it and mostly because we just didn't have any (because my husband doesn't care for it, ha), but put a pinch of dried cilantro in instead. This is a delicious soup. Filling. Colorful. Spicy (go with the 2 chilis she suggests, and maybe taste it and see if you want to add a bit more of the sauce too; it's really not too hot). 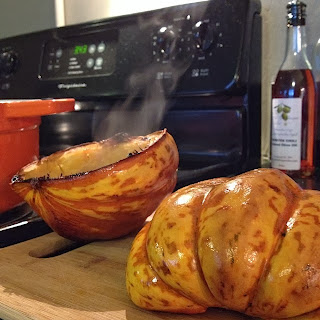 I put together a salad from another source, but I heavily edited it. It was a Mexican Salad with Honey Lime Dressing, and as such had corn and black beans in it (which I didn't want seeing as the soup already contained those), and also contained jicama, which is cool but would have necessitated me running to the grocery store. AND the recipe would have made too much for us. So here's what I did, for 2 good sized servings:

These two dishes went beautifully together (visually and gustatorially), and I kind of want to make the salad again when we have leftover soup this evening or tomorrow.


*Sidenote: this made a lot of soup. We put some of it in the freezer.
Posted by Bobbi Martens at 9:52 AM 1 comment: