Email ThisBlogThis!Share to TwitterShare to FacebookShare to Pinterest
Labels: Christ, linked, wise people around me

Summertime. School is out. The Loving Roommate Society of Garfield Street has by necessity dissolved and will, alas, never be quite the same again. 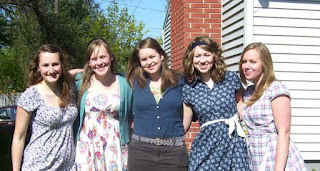 It is always strange being here when the other 4 girls are away, and I'm going to be here all summer while they are gone or will soon be taking off on their varied and restful and exciting lives. I shall miss their lovely persons, all their delightful quirks, our funny conversations, our movies while we're all crammed onto one ordinary-sized couch, and the crazy moments in my car when accidents seem inevitable but are always avoided.
I'll miss waking up to Tali putting away dishes in the morning, and when we gang up on a huge pile of pots and pans and plates and cups and wine glasses after an epic weekend. I'll miss the rommmate dinners and the hospitality dinners, crowding too many people around our tables and asking the smallest person to sit on the high wooden stool, and passing the food and laughing at Emma's salting techniques and the ever-present problem of the water filter pitchers falling apart as you pour your water. I'll miss the after-dinner festivities: playing with the candles, snacking from the last piece on the serving dish, messing with the guitar and the mandolin, newspaper and seven pencils games, watching the fire and re-stoking it, or going out into the grass in the nice weather. I'll miss the walks at midnight, the pumpkin pie at midnight, the peanut butter cookies at midnight, watching House far past midnight, and laughing until we are almost sick at many of those crazy hours.
I'll miss Emma's beautiful voice coming from the bathroom, Maria's Italian playlist coming on when she needs a perk, Becki's singing along with her country music while she has her earbuds in, and Tali's loud sunshine music on Saturday morning cleaning sprees.
I'll miss the mountain trips, the Winco trips, and going to church together. I'll miss how we keep our food in separate cupboards but share something at least once a day. I'll miss asking for help with hair and what to wear to a dance. I'll even miss the little pregnant squaw and her legacy.
I'll miss reading the funny-page together. I'll miss talking about guys. And talking about church services. And talking about our families. I'll miss Emma's generosity with MnM's and with the hilarious frosted mini-wheats. And Becki's sudden urges to make pudding or elaborate dinners when she is stressed. I'll miss Ria's snark, and Tali's scandalousness and obsession with putting pepper into things.
I'll miss pretty much everything about the last nine months with these lovely ladies. It has been one of the best years of my life, and probably mostly because of who I spent it with. God has used these servants of His to sanctify and gladden me time and time again. What a gift, our year in the corner house together.
Posted by Bobbi Martens at 2:34 PM No comments:

It's been ages since I've written much for a blog post, and all I'm going to do now is count some of the blessings and glories of this life of mine. God is, of course, genuinely good all of the time, but some seasons of your life you just *notice* that goodness more.

I'm thankful these days for:

the way grass feels under your bare feet

how stained green those feet can get

mowing the lawn in straight, even rows

cold Sangria in a bell of a glass

cut-offs and the feel of the sun on skin

the sun sinking behind you, watching the shadow of a mountain grow

hugs from good friends as they say goodbye

even the coughs that result from laughter

the weight of the backpack's straps on your shoulders

the sound of water

Posted by Bobbi Martens at 7:30 PM No comments:

Rinsed with Gold, Endless, Walking the Fields
By Robert Siegel
Let this day’s air praise the Lord—
Rinsed with gold, endless, walking the fields,
Blue and bearing the clouds like censers,
Holding the sun like a single note
Running through all things, a basso profundo
Rousing the birds to an endless chorus.
Let the river throw itself down before him,
The rapids laugh and flash with his praise,
Let the lake tremble about its edges
And gather itself in one clear thought
To mirror the heavens and the reckless gulls
That swoop and rise on its glittering shores.
Let the lawn burn continually before him
A green flame, and the tree’s shadow
Sweep over it like the baton of a conductor,
Let winds hug the housecorners and woodsmoke
Sweeten the world with her invisible dress,
Let the cricket wind his heartspring
And draw the night by like a child’s toy.
Let the tree stand and thoughtfully consider
His presence as its leaves dip and row
The long sea of winds, as sun and moon
Unfurl and decline like contending flags.
Let blackbirds quick as knives praise the Lord,
Let the sparrow line the moon for her nest
And pick the early sun for her cherry,
Let her slide on the outgoing breath of evening,
Telling of raven and dove,
The quick flutters, homings to the green houses.
Let the worm climb a winding stair,
Let the mole offer no sad explanation
As he paddles aside the dark from his nose,
Let the dog tug on the leash of his bark
The startled cat electrically hiss,
And the snake sign her name in the dust
In joy. For it is he who underlies
The rock from its liquid foundation,
The sharp contraries of the giddy atom,
The unimaginable curve of space,
Time pulling like a patient string,
And gravity, fiercest of natural loves.
At his laughter, splendor riddles the night,
Galaxies swarm from a secret hive,
Mountains split and crawl for aeons
To huddle again, and planets melt
In the last tantrum of a dying star.
At his least signal spring shifts
Its green patina over half the earth,
Deserts whisper themselves over the cities,
Polar caps widen and wither like flowers.
In his stillness rock shifts, root probes,
The spider tenses her geometrical ego,
The larva dreams in the heart of the peachwood,
The child’s pencil makes a shaky line,
The dog sighs and settles deeper,
And a smile takes hold like the feet of a bird.
Sit straight, let the air ride down your backbone,
Let your lungs unfold like a field of roses,
Your eyes hang the sun and moon between them,
Your hands weigh the sky in even balance,
Your tongue, swiftest of members, release a word
Spoken at conception to the sanctum of genes,
And each breath rise sinuous with praise.
Let your feet move to the rhythm of your pulse
(Your joints like pearls and rubies he has hidden),
And your hands float high on the tide of your feelings.
Now, shout from the stomach, hoarse with music,
Give gladness and joy back to the Lord,
Who, sly as a milkweed, takes root in your heart.
Posted by Bobbi Martens at 11:28 PM 2 comments:

deserts and lizards and snakes, oh my


Posted by Bobbi Martens at 5:07 PM No comments: