Monday was a day for soup. Ergo, I went shopping for very specific items and made a pot of it. I had in mind my mom's utterly comfortable potato soup, but wanted it a little more refined and healthy, a little more bacony, and wanted to skip one ingredient hers has that I think just might not belong. It was a good experiment, and I'm writing it down for the sake of posterity, or maybe just so I remember how to do it again. My method is pretty relaxed and unmeasured, so I apologize if you aren't the kind of person who eyeballs it, or adds ingredients by pinch and slosh.

First, I peeled 5 pounds of red potatoes. The pot fed 12ish people, so it's a decent amount. Chop them up and simmer them until almost soft, and drain them (the fork goes into them but they don't fall apart; they will cook more after everything else is added). While they are cooking, cut up 2 pounds of bacon and fry it. A large onion (hot), 2 or 3 crowns of broccoli and 5 or 6 cloves of garlic should be prepared. The sliced onion, diced broccoli, and minced garlic are sauteed in about 1/2 of the bacon grease (put the garlic in only for the last minute or so or it will overcook and not taste as good). 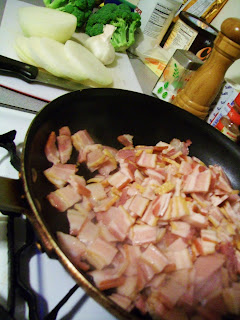 Add the bacon and the veggies to the potatoes. Don't put the rest of the bacon grease in unless you like a thick skim of fat floating on top of the pot of soup. Also add a couple cups of chicken broth and enough milk to cover everything and a bit extra so it's a half-inch or so above the potatoes etc.

Salt and pepper generously and to taste - I think I used about 1.5 teaspoons of fresh ground pepper and at least a Tablespoon of salt. Cook on low (not quite simmering; it's easy to burn this milk-based soup) for an hour or so. Best with bread of some kind, not crackers. And homemade bread, fresh and warm, if possible.
Posted by Bobbi Martens at 1:12 PM