When your sister brings a gallon of half-and-half home and you've been skimping on milk for a while, what a party for your palate. Here are some things I've been doing with it this week. 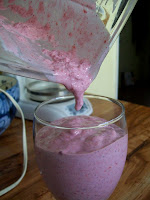 (Straw)berry Smoothie - ultra general and subjective recipe
Drop some frozen berries into the blender
Add enough dairy (milk, half-and-half, cream?) to nearly cover the bulging frosty fruit
Dribble some vanilla in there
Add a dash of sugar if you like (completely heavenly without it!)
Optional: add more berries or a berry syrup for extra flavor
Blend on 'pulse' until texture looks good and there are no large frozen pieces in there. 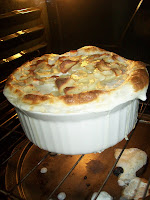 Creamy Potatoes or maybe Potatoes au Creme because there's no Gratin
Peel potatoes (russets or any old kind will work, but Red Pontiacs are my favorite)
Slice super(paper-)thin and layer in casserole dish/cake pan
Every few layers, pause and add salt. Sea salt is especially good.
About 1/3, 2/3 and at the top of the pan, sprinkle pepper and a very little nutmeg, and, if so desired, some onions. A word of warning about the onion: be very, very moderate. I would do half an onion or less in a panful for my entire family. These slices are so delicate most of them don't even constitute slices but distintegrate in your fingers. And the dish works without them too, they just add a certain little dash of whatsit.
When your pan is full, pour cream (I would advise heavy cream, but today I used half and half and it worked all right, just not quite as decadent and delicious)until the potatoes are submerged completely. So much creamy healthiness. :)
Bake at 400* for about an hour. The top will be all browned and golden (but not black; turn the oven down if that's gonna happen) and a knife will slide into them easily
Cool slightly before putting on the table. They keep the heat extremely well. 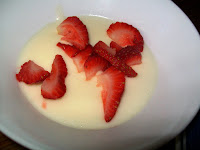 which I actually DO have measurements for, because it's from allrecipes.com, only I fudged things a little, of course
Heat up 2 cups of milk (half-and-half, people: more substance, more yummy) in a medium saucepan until hot but not boiling. The milk will have little bubbles in it. I stirred mine almost constantly because I didn't want any scorching to happen, but I don't think you HAVE to
While that's heating, combine in a small bowl 1/2 cup (or less) white sugar, 3 Tablespoons cornstarch and 1/4 teas salt.
Also get out of your cupboard/fridge at this time: vanilla, and 1 TBSP butter
When the milk's nice and hot, pour some of the dry stuff into the milk while you're whisking the milk. Do just a bit at a time, and keep whisking, so that lumps aren't formed
Stick a spoon into it once in a while, and when the spoon back is covered nicely with white stuff (it's not so thin that it slips right off), pull the pan off the stove and immediately add the 1 tsp vanilla and the tablespoon of butter, stirring until well combined.
Pour the pudding into individual bowls and chill in fridge for a while. Maybe 30 minutes. Maybe longer. Mine was done way before dinner so I don't know how long it took to cool.
Yummy served with sliced berries. Potentially delicious with almond flavoring and craisins served with dark chocolate on the side.

Posted by Bobbi Martens at 8:55 PM